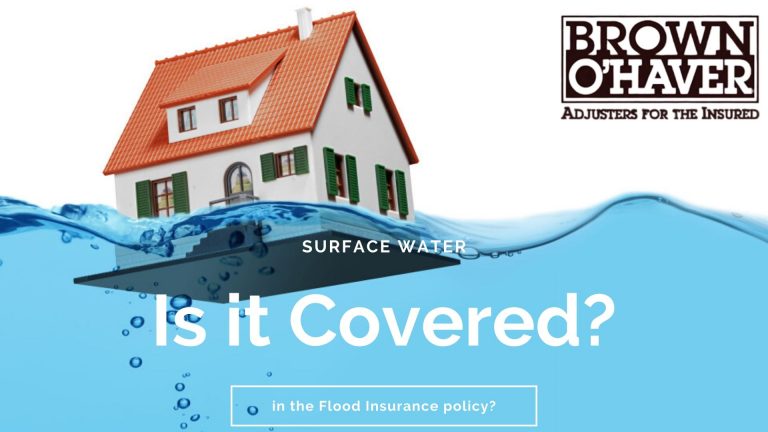 Surface Water: Is it Covered?

Is surface water covered in a typical homeowner’s policy?

The answer is NO.  Surface water is not covered due to policy flood insurance exclusions …  but just what is “surface water”.

We recently helped an insured who had presented a water claim that was denied due to the “Surface Water Exclusion”.  The loss arose out of a human error which allowed irrigation water to run longer than it should have and a basement of an upscale home filed up with water causing some serious damage.  The insurance company’s  response was to write a letter regarding policy  “exclusions”.  The policy contains the following exclusions:

“Ground water.  We do not cover any loss caused by water or water borne material in the ground, or by its pressure, leakage, or seepage.  But we do insure (an) ensuing covered loss unless another exclusion applies.”

To help this insured, I presented an argument that exclusions did not apply to the facts of this loss.   This loss occurred when the insured’s daughter turned on the flood irrigation valve to the property, which was located around 200 feet from the residence structure.  The daughter did not return to shut off the valve in a timely fashion.

As a result, irrigation water ran unchecked for a long enough period that it overtook the concrete sidewalk and curb surrounding the house (which usually formed a barrier that protected the house from irrigation water intrusion) and water was permitted to enter the ground level and basement of the home.

Do you know the Difference Between Insurance Company, Independent Adjuster and Public Insurance Adjuster

I advised the insurer that it should be noted that the “loss was of irrigation water which is part of a system of canals that distributes water throughout the area where the insured’s residence is located”. Since we are not dealing with the open seas or a lake in this case, we can immediately dispose of the language of the exclusion dealing with “waves,” “tidal water,” or “overflow of water from a body of water”, I told them.

Also, this loss did not involve a “flood” as that term has been defined by our Courts.  In Wallis v. Country Mutual Companies, 723 N.E. 376 (2000) the Illinois Court of Appeals considered similar language and defined “flood” as follows:

“The term “flood” is not defined in the policy; therefore, we defer to its plain and ordinary meaning. The common meaning of a flood is “a rising and overflowing of a body of water that covers land not usu[ally] under water.” Webster’s Third New International Dictionary 873 (1993).  Water from a flood is termed “floodwater” which means, “[w]ater that escapes from a watercourse in large volumes and flows over adjoining property in no regular channel.” Black’s Law Dictionary 1585 (7th ed. 1999).”

Since this loss involved water that was delivered to the insured’s property by man made irrigation canals, it is not, therefore, “surface water”, I argued.   This issue was addressed in Heller v. Fire Insurance Exchange, 800 P.2d 1006 (1990).  There, the Colorado Supreme Court held that water that originated from natural snow run off but was then diverted into man made trenches was not “surface water” within the meaning of the exclusion in a property insurance policy. The Court stated:

“Here, the water originated from natural runoff of melted snow, but was diverted into man-made trenches that were fifteen to twenty feet long and six inches deep. The trenches diverted the regular path of the melted snow over a natural ridge. These trenches were “defined channels” that diverted the regular flow of the water, preventing “percolation, evaporation, or natural drainage.” In examining the characteristics of the water that damaged the Hellers’ property, we conclude that the runoff lost its character as surface water when it was diverted by the trenches and therefore was not within the surface water exclusion contained in the Hellers’ policy.

This left only the language of the exclusion regarding “overflow from a sewer or drain.”  This language also did not apply to the scenario of the insured’s loss.  This was not a case were a drain or sewer became clogged or overfilled and then backed up.   The water from the irrigation canal was simply not turned off in time and the water overtook the natural and man made barriers that surrounded the house.

According to the holdings of the Courts, a “backup” or “overflow” of a drain connotes water coming out of a drain that is designed to carry water away from a structure.  See Pichel v. Dryden Mutual Ins. Co. 965 N.Y.S. 2d 342 (May 23, 2013).  There were no facts to indicate that a drain was even involved in the present matter.

Having dispensed with every argument that the insurer could make to deny the claim, the insurer tendered payment.